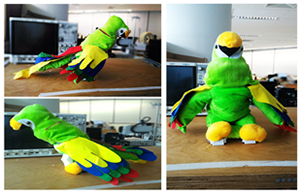 Brief Description: The research is aimed to develop a highly interactive parrot-inspired robot  on which a new teaching method called “Adapted Model-Rival Method” (AMRM)  will be implemented  to help children with autism.  In the AMRM method, the  interaction between the robot and the teacher   in front of  the children   can encourage  the latter to interact with the robot and  improve  their learning  and socialising abilities.

Investigation into the factors affecting bioimpedance measurements at human limbs

This research focusses on estimating the Bioimpedance response of human tissues, more specifically the human limbs. The motivation is to employ the impedance variations measured from tissues to be used in medical diagnostics to estimate important physiological parameters such as Pulse Wave Velocity (PWV) and Augmentation Index (AI). The implication of single frequency Electrical Bioimpedance Analysis (SF-EBIA) and multi-frequency Electrical Bioimpedance Analysis (MF-EBIA) forms the basis of this study. Another major highlight of this research is to account for the factors which influence the impedance measurements and their contribution to the overall results. The study involves a simulation perspective to realise the Bioimpedance measurements at human forearm and analyse the response over β-dispersion frequency range for dielectrics (1 kHz – 2 MHz). The response of Debye-type dielectric fluids, in different compositional mixtures, forms the initial experimental phase with the objective of producing a potential alternative for blood. The main idea is to study the dielectric response of human tissues, especially blood and its flow, and relating it to identify the individual contribution of each to the overall response. Also, the electrode size and geometry are major factors that induce significant contributions to impedance measurements and hence constitute a major part of this study.

The development of an extra-aortic balloon cuff with peristaltic motion and counterpulsation system is explored to investigate the practicality for future treatments for chronic heart failure (CHF).  This concept is an extension of existing heart assisting technology marketed as C-Pulse by Sunshine Heart which is used to treat patients with New York Heart Association (NYHA) class III and ambulatory class IV heart failure.  This is a Master of Engineering project that is guided by both Dr Andrew Lowe and Jeff Kilby for which a functional prototype is developed at IBTec.  This project incorporates experimentation of both software simulation and hardware aspects.  The software experiment simulated the aortic pressure and flow waveform under the influence of an external peristaltic augmentation using a one dimensional wave propagation mode.  The hardware prototype was developed using an Arduino based controller that drives multiple pneumatic pumps that inflates and deflates a balloon cuff – attached to the descending aorta –  counterpulsation to the cardiac cycle.  A devised left ventricle mechanism with an attached phantom aorta was constructed and utilized as a testing platform for the functionality of the prototype.  This research has the potential to not only provide knowledge of modelling hemodynamic with an external peristaltic augmentation and counterpulsation, but to also introduce a novel medical device that is feasible to assist heart function for patients with CHF in the near future.